The award was presented at a ceremony in June, for the shock absorbers KYB has developed for the new model of the Toyota Corolla Sport. Toyota recognised that the original KYB technology had made a great contribution to the improvement of the capabilities of the new vehicle and KYB was awarded a certificate of commendation.

The new Corolla Sport has initially been launched in Japan. The suspension uses MacPherson Struts for the front and double wishbone suspension for the rear. This is the first Toyota front wheel drive model using a linear-solenoid Adaptive Variable Suspension (AVS) system. AVS adjusts the damping force for each wheel according to the road surface and driving conditions, in order to provide a comfortable drive on any road surface.

The KYB shock absorbers optimise the damping force at low speeds, responding quickly from the start, as well as providing excellent handling and ride comfort at faster speeds. By reducing body roll during cornering, the steering and emergency avoidance ability has been enhanced. By controlling the damping force independently for each wheel, AVS maintains the posture of the vehicle. There is an additional sports mode on the vehicle, where the damping force is switched to be suitable for sports driving.

The new shock absorbers had 600 separate tests, using various combinations of oils and components, before the final selection was made to achieve a comfortable drive with responsive steering. 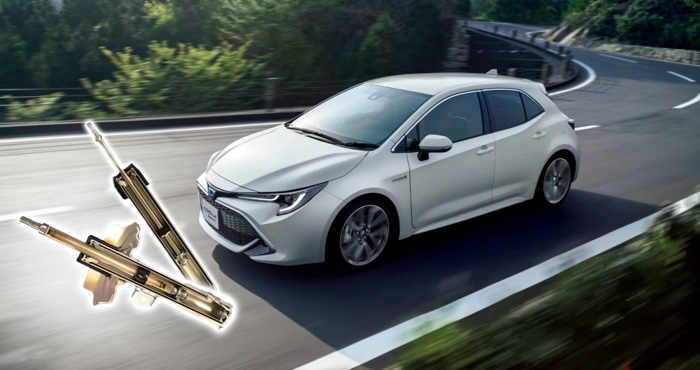